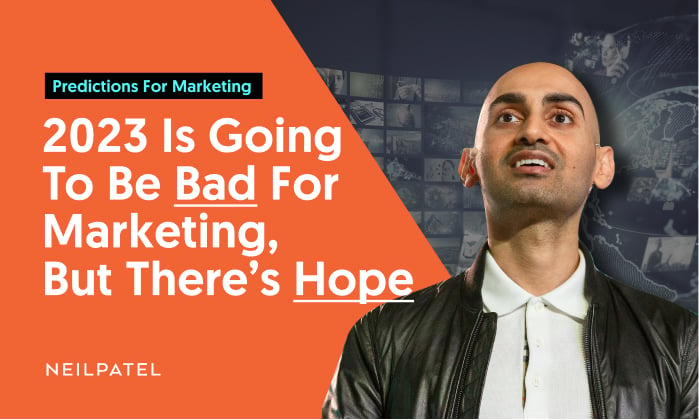 If you just look at the data, it paints a very grim future for marketing… at least in the short run.

For example, we may go into a global recession as the Federal Reserve continually increases interest rates and it has caused businesses to cut back.

Especially on the advertising front.

Just look at the recent earnings calls from advertising giants. Alphabet only slightly increased advertising revenue in total, although YouTube decreased by roughly 2%.

They are also seeing massive pullbacks in some large industries. For example, there has been a pullback in crypto, mortgage, insurance, and even gaming ad spend.

They also stated that their Q4 revenue, which mainly comes from advertising, is lower than most predicted with a range of $30 to $32.5 billion.

Snap had a similar story to the other online ad platforms, while Pinterest grew 8% a year which was more than analysts expected.

Nonetheless, no matter what platform you look at, it’s safe to say that the advertising industry is seeing a slowdown.

Now let’s dive into the obvious bad news, and then we will get into the silver lining and how you should adapt. Because there is hope and you can still do well in this market.

The marketing industry is going in a downward direction fast. I’m no economist, but most of it is related to external factors none of us can control… such as rising interest rates, supply chain issues, increases in oil and energy prices, issues with real estate across the world, and worst of all, war.

Just think of it this way, the companies in the S&P 500 have a market capitalization of 30.12 trillion dollars.

To put it in perspective, if Apple, Amazon, Google, Facebook, and Microsoft didn’t exist that would only be 6.8 trillion dollars (based on today’s stock price).

When the market goes down, the value of which companies are worth goes down, which means companies cut back on spending. Marketing happens to be the first thing that gets cut in a bad economy.

And when the value of companies goes down, a lot of people’s net worth goes down. Just in America alone, 43% of the population owns stocks.

So, when people’s net worth goes down, eventually they start spending less. It’s already started to slow too… when you look at data from the first half of this year (inflation-adjusted) spending increased by 1.5% compared to 12% last year.

But what about marketing?

Because our agency, NP Digital, works with companies of all sizes we see data from both small and medium businesses as well as enterprises.

Plus we have offices and employees throughout the world such as in Canada, Brazil, Germany, India, Australia, etc… because we work with companies in multiple regions and help them with their global and local marketing campaigns.

That in combination with working closely with some of the big advertising platforms and having tools like Ubersuggest that tracks millions of domains we really see a lot of data and trends.

Here are the 3 main trends we are seeing (keep in mind the data below is from what we can see and track, as we don’t have data on the whole web or even a large fraction of it):

Overall, the global costs for ads have been going down by 4%. Some industries like real estate have gone down much more, but with other industries like B2B SaaS, we haven’t seen much of a change with our clients as they optimize for lifetime value.

A lot of this is because businesses are cutting back on their spending in addition to many sectors such as real estate not having the same demand that they had a year ago.

We aren’t seeing conversion rates as high as they used to be. We’ve seen a drop of 7.13%.

Conversion rates are also affected by many other factors such as companies increasing prices due to inflation costs, shipping costs, and supply chain delays.

Or conversion rates being lower because some people aren’t spending as much because they may have lost their job.

Trend #3: Companies are fearful of the unknown

We are seeing some companies pulling back on their total marketing budget because they are afraid of what lies ahead.

But we are also seeing companies shift their budget to digital marketing because it is easier to track than let’s say traditional TV or radio advertising.

Now we don’t manage traditional budgets for our clients, but we handle the digital side. In a good or a bad economy, companies tend to spend on digital marketing (things like SEO, paid ads, email marketing, social media, etc) as long as it is profitable.

The silver lining in marketing

As I mentioned earlier, we see a lot of data.

There’s a pattern that we have seen with the companies that have been growing this year (the ones we work with at least).

And to be clear, when I say growing, I mean companies that are generating more revenue and profit.

These companies are also taking advantage of the current economic climate to double down on their whole business, not just marketing, to gain more market share.

So, what are these growing companies doing in this economy?

Just because the economy isn’t where you want it to be, it doesn’t mean you can’t grow.

And if you really have headwinds ahead of you such as the mortgage industry, you can still make a lot of changes that will put the company in a much better place when the economy starts to recover.

In other words, start thinking outside the box. Don’t focus all of your energy on the news… sure it’s smart for you to stay up to date with what is happening, but the majority of your time should be spent on solutions and new ways to grow.

If you want my team to help with this, just check out my ad agency NP Digital.

So, what are you seeing in this economy?