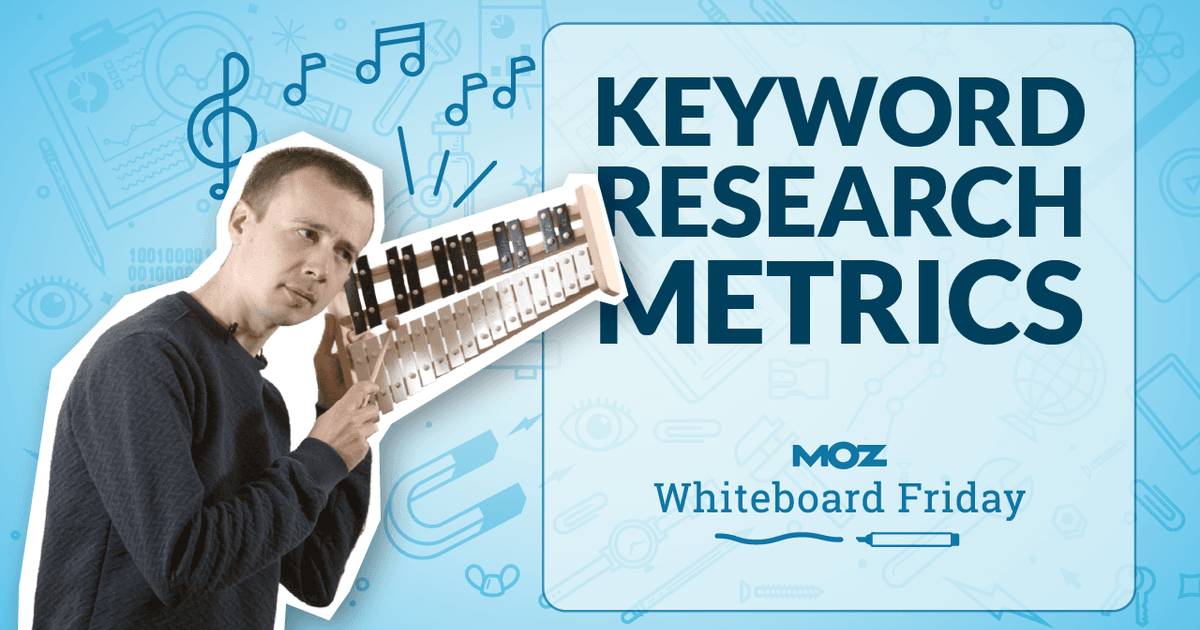 Many SEOs think of keyword research as a very basic part of SEO, which can actually be a problem. In today’s Whiteboard Friday, Tom explains some of the common mistakes SEOs make when doing keyword research that are easy to fix, many of which come from metrics like search volume, click-through rate, and difficulty.

Happy Friday, Moz fans, and today I’m going to be talking to you about metrics, but specifically metrics for keyword research. Now I think this is a very fundamental part of SEO. A lot of people think of it as a very basic part of SEO, which can be a problem sometimes.

I think often this might be the very first task you’re asked to do in your SEO career. But I think there are some common sort of mistakes or misunderstandings within keyword research that are quite easy to fix, and a lot of it comes from metrics. So these are the three metrics I want to talk about today. So there’s search volume, click-through rate, and difficulty. I want to talk to you about how you can sort of use these together and where you need to be careful.

So one of the better known ones is, I think, probably about seven years ago now, I can remember the late great Russ Jones talking about some of the problems with Google Keyword Planner data, which is really a ubiquitous data source in a lot of tools.

I understand why. In a lot of cases, it’s the only practical data source to use. But Google Keyword Planner data has some issues. So I’m not going to go into those now because, like I say, it’s been talked about a lot in the industry. Hopefully, some of those older resources will be linked to below.

But I just want to talk about how impactful it can be in your research and in what you’re trying to do for your business. So I did a test recently where I gathered a bunch of sample keywords and I benchmarked them in various metrics and various tools to see what volumes I got. Now, the source of truth I’m using here is Google Search Console. So you can be reasonably confident that if you rank first for something, then in Google Search Console, the number of impressions you have will be equivalent to the true volume.

Now, there are some caveats there. Maybe you only rank first on certain days or in certain locals or certain devices. There’s a bunch of data cleaning and work that we have to do to clean that out. But once that’s done, we can say, okay, in this particular sample of keywords, the average search volume was about 97 searches a month. Now, it could have been anything.

Just in this particular sample it happened to be 97 searches a month. Now, in Moz’s tools, I put in the same set of keywords and we got an average of 101, which I’m pretty pleased with. That’s quite close. Then in a couple of competing tools that also don’t use Google Keyword Planner data, they got 150 and 190. So same sort of order of magnitude.

But then the Google Keyword Planner data, on average was 1,803. So that doesn’t even fit on the whiteboard, by the way, to get that chart into scale. Obviously, that’s quite a big problem. If you were using this in anything sort of business critical and your boss is saying, “Oh, can you estimate how much traffic this new site section might get or how much revenue we might make,” and your estimate is out by a factor of 18, that is going to be a problem.

So this is a big danger. Even though this is an old problem, I was actually surprised by how impactful this could be in the real world.

The other problem with keyword volume is a bit of a subtler one, and it has to do with how much SERPs are changing over time now. The issue here is that we’re only interested in search volume because we’re interested in clicks.

We want people to search a keyword, and we want to know how many people are searching a keyword because we think we might win their click by ranking. But the trouble is, these days, search volume doesn’t actually give you that much of an idea about how many people might click or could click. So you might have keywords with very similar volumes that actually have very different numbers of clicks available.

Only about a third of these keywords, slightly over a third of these keywords had a total number of clicks that were similar to the search volume, 81% to 100% of the search volume. So this is really interesting because there’s a wild spread here, and this varies a lot from one keyword sample to the next. Basically what this means is that just knowing about volume doesn’t mean you actually know about clicks, any more at least.

So this is a bit of a problem when we’re using search volume as a metric. We kind of have to use, but there are maybe some issues.

So that can help you to have a better idea for the sort of actual opportunity that comes with a keyword rather than just search volume, which basically doesn’t give you much of a clue about that on its own. So you can use these together to get a better idea.

The last metric I want to talk about that you can use with these is difficulty.

So keyword difficulty is a metric we have in Moz. Some other tools have similar things. What we do is we take the Page Authority and Domain Authority of the other results that are ranking for that keyword to get an idea of sort of how tough the table stakes are for this competition. Then we also look at the click-through rate, the total click-through rate of that query, like I was just talking about.

So this gives you an idea of how dominated this SERP is going to be perhaps by Google features or something like that. Then together this forms our difficulty score. So this gives you an idea of the level of opportunity here. So when you use all three of these together, you can say, “Okay, I’ve got this many searches and this click-through rate, so I know how many clicks are available. Then with the difficulty, I know how many of these clicks I might actually be able to win.”

So that’s all. Relatively quick and simple one. Hope you found that useful. Let us know on social, and I’m sure we’ll have more of these coming right up. Thank you.