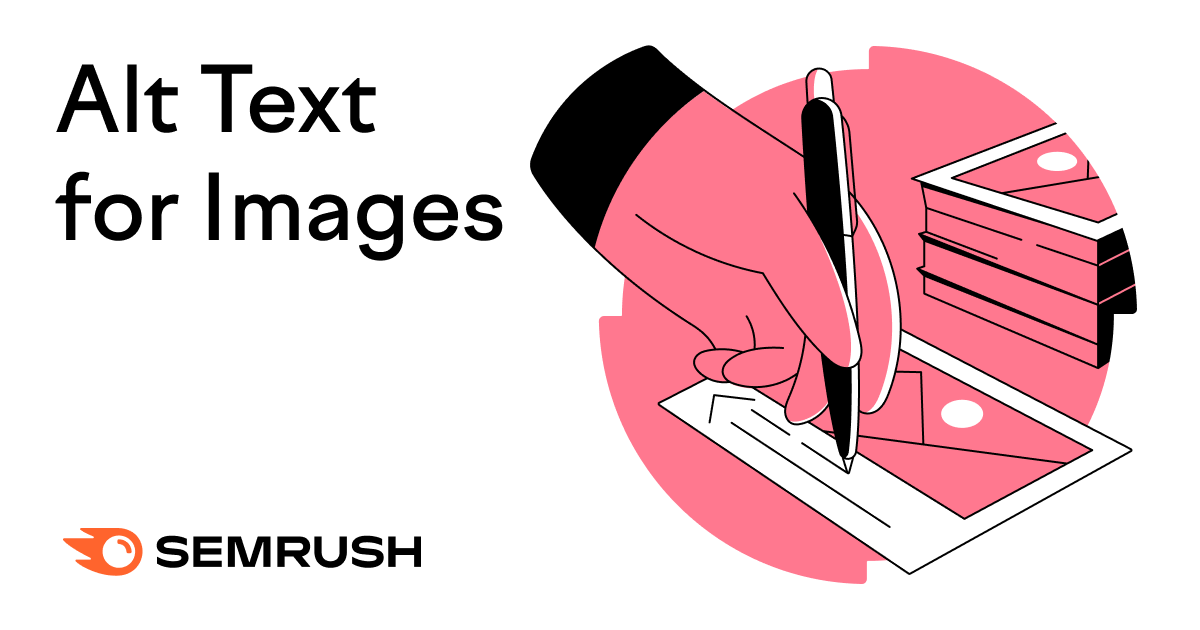 What Is Alt Text?

Alt text (short for alternative text) is text included in HTML code to describe an image on a webpage.

It provides context for search engine crawlers as well as for those viewing a page with a screen reader.

Alt text is also commonly referred to as “alt attributes” and “alt tags.”

And here’s an alt text example in HTML:

<img src="hanging-planter.jpg" alt="Disco ball hanging planter with vines hanging off the side">

Why Is Alt Text Important for Image SEO?

This makes images a powerful way to get more SEO traffic.

And Google reads alt text to help understand what images are about. Without alt text, your images are much less likely to rank on Google Images.

Google also often displays images at the top of regular Google search results, before webpages. For example, if we search for “content distribution chart” we see images displayed as the top results:

So optimizing your image alt text can lead to more traffic from both Google and Google Images.

In this article, we’ll cover exactly how to do that. Including examples, best practices, and how to find and fix missing alt text.

To write the most effective alt text, be descriptive and use a natural tone of voice. Think about how you’d describe an image to someone in a conversation. Don’t try to stuff it full of keywords (which sounds robotic).

We’ll start with this picture of a charcuterie board:

Better alt text example: alt=”Charcuterie board with meats and cheese”

The “bad” example here is targeting a specific keyword (“ideas for dinner parties”) without actually telling us what’s in the image. While the “okay” and “better” examples do a better job, our “best” example provides the most detail and context for the picture.

Next, let’s go over this image taken at Central Park:

The “bad” example is a list of words rather than a description. The “best” example includes information about the specific location as well as what’s shown in the picture.

Lastly, here’s an image from the 2008 Beijing Olympics:

Similarly, our “bad” example here feels unnatural and doesn’t really tell us what’s going on in the picture.

Notice that all of our “best” examples are the most descriptive without being spammy. And when there’s a clear name or event related to the image (like Central Park or Beijing Olympics), that’s included as well.

Let’s go over some ground rules to follow when writing alt text.

We’ve already covered that good alt text is descriptive without being spammy, but here are a few more important notes:

It’s best to cap your alt text at this number so it doesn’t get cut off.

Include One Main Keyword for Context

This may seem counterintuitive to our previous advice. However, it’s a good idea to include a main keyword in your alt text if it provides context for the page the image is on.

The point of alt text is to provide additional information and context, and the target keyword often does just that.

To make it more natural, you also can use variations of your main keyword.

Let’s say we’re writing alt text for this image from our blog post on building backlinks:

This blog post targets the keyword “link building,” but it would feel a bit forced to add that in here because the image is about a more specific topic.

So a good strategy here could be: alt=”examples of what makes a good link”

This way we include the partial keyword “link,” but it’s still relevant to both the image and the webpage.

While the goal of alt text is to provide as much context for images as possible, there are some images that don’t really need further explanation.

There’s no need to include alt text for decorative images like icons, horizontal line page breaks, a magnifying glass icon in a search bar, etc.

Those using screen readers don’t need to know what these images look like to understand the page, and Google doesn’t need further information or additional context in order to rank the webpage.

Here’s an example of a decorative illustration that wouldn’t need alt text:

Don’t Include “Image of” or “Picture of” in Alt Text

As mentioned, you only have 125 characters to describe your image. Including filler text like “picture of” or “image of” will only waste that space, since it’s already implied to both users and Google that these are images.

Here’s a example of what not to do vs. what to do for an image of a floor lamp:

The second option is more to-the-point and adds key additional information and context.

There’s no reason to include redundant information in your alt text. If a photo already has a caption, instead of repeating it in the alt text, provide more context about the photo instead.

Here’s an example of an image with a caption for Strand Bookstore in New York:

The second alt text is more accessible—instead of repeating the caption, it describes what’s actually happening in the picture.

To check if there’s missing alt text on your site, use our Site Audit tool.

Start by clicking the “Add new project” button in the upper-right.

Follow the instructions to finish setting up your Site Audit, then give it a chance to run.

You’ll be directed to a list of Errors, Warnings, and Notices. Narrow your search results by looking for “alt attributes.” This will show you how many images are missing alt text:

Click the link (“57 images” above) to see exactly which images are causing the issue so you can log in to your site and fix them.

Your next step is to log into your CMS and add alt text to any images listed here.

Once you add the missing alt text to your site, you can re-run your Site Audit so it can reflect the changes.