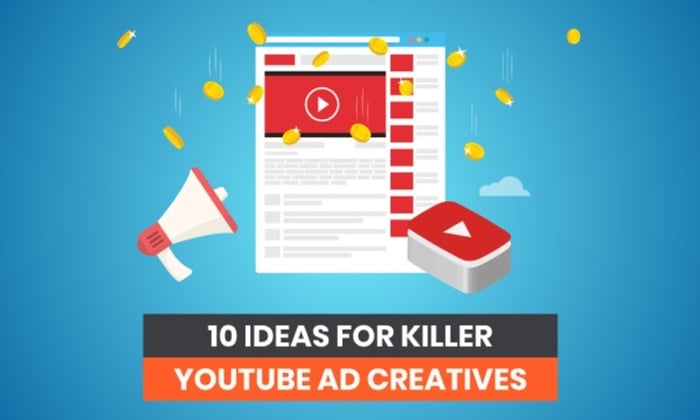 Ad creatives are the ads served to users on a social media or digital media platform. On YouTube, these are most often video ads and may include images, video, audio, and text. When combined, these creative elements form a full video advertisement.

YouTube ads are just another way to expand your reach. To ensure your campaigns are most effective, though, you need to ensure you are creating killer YouTube ad creatives.

This article will look at the ten best ideas for creating killer YouTube ad creatives. By the end of the post, you’ll understand how to ensure your ad creatives are the best they can be.

Here are a few ideas for creating top-notch YouTube advertisement creatives for your video ad campaigns.

1. Use the Element of Surprise

In a survey of Twitter users, 43 percent of respondents say they would watch the entire video ad if it has interesting content. That is where the element of surprise comes in.

There are a handful of brands that are known for their outlandish and surprising ad content. These include Skittles, Cheetos, Doritos, and Old Spice. Their content often starts on a relatively normal note, but then takes a surprise turn.

Take a look at this Old Spice YouTube ad they ran before Super Bowl LV:

The ad starts with a relatable activity that then turns fantastical in a matter of seconds. The element of surprise here is funny and lives up to the brand’s usual commercial antics.

A crucial part of any successful YouTube ad is that it is relatable to your target audience. What that looks like will differ, but here are some tips to help.

To be relatable, you must first know who it is you are relating to. That would be your target audience. They will be defined by various data points, including:

With that information in hand, you can shape a story that either piques their interest or pushes on a pain point. Your ad creatives would be tailored to that audience using relevant audio and visuals.

The key is not to try too hard to relate. It should come organically within the creative process. The better you know your audience, the more natural it will appear.

You don’t have to reinvent the wheel for every YouTube ad creative. If a competitor created an ad with the right idea but less-than-stellar execution, this lets you step in and improve.

To be clear, this does not mean plagiarizing your competition’s work. The fact is, there are no truly original ideas, but every idea can be expanded upon and improved.

To begin, take a look at competitor advertisements. Ask yourself these questions:

With a few ideas on how to improve your competitor’s video ads, you can now work to create a campaign with improved video ad creatives. The best place to start is by applying a unique angle to a similar ad creative concept.

4. Include a Call to Action

Do you want your ad to educate, inspire, or convert? You are likely looking to achieve at least two of the three. Instead of leaving your audience wondering what they should do, tell them.

A call to action is a message that clearly states what action you want your audience to take. You’ll often see these as “Learn more” or “Buy now” online. There is often hesitancy to include a direct call to action as it may appear pushy. The fact is, viewers will know they are viewing an ad and expect to be told what to do.

If you’re wary of direct calls to action, consider a subtler approach. Let’s take another look at that Old Spice advertisement from above:

At the end of the ad, the star can be seen gesturing to the top right of the video playback. He’s pointing to a call to action, which aligns with how YouTubers often point out additional information or other videos to view. It’s a subtle touch, but one that uses YouTube’s in-built features to drive their point home further.

With ad creatives, it’s crucial to experiment and track audience engagement continuously. This ensures better results as you learn what your audience responds to.

What should you be testing? When it comes to testing, creative elements that include text, font color, and size can be manipulated to test viewer engagement. This is especially important with calls to action.

Other elements to test on your video ad creatives include:

For best results, stick to testing just one creative element at a time. You can run multi-element tests once you have data from these initial A/B tests.

6. Tell a Story or Narrative

One element of a good ad is the ability to draw your audience in. An easy way to do this is by using storytelling. A story can be informative, heartwarming, funny, or a combination of the three. What’s most important is that you draw the audience into the story with vivid ad creatives.

Take, for example, the “A Parent’s Imagination” Subaru Forester ad. It clearly outlines the fears of all parents as their teens take to the road:

The combination of somber music and the back-and-forth visuals between imagination and reality drives the story home. It’s a story easy enough to understand without dialogue and one that pulls at the heartstrings.

Whether you intend to inform, educate, or convert, your ads don’t have to be explicit in their intention. In fact, obtrusive and blatant advertisements can be harmful to your overall marketing campaign.

According to HubSpot, 77 percent of online browsers say they prefer to ad filter rather than completely ad-block. Viewers dislike the more obnoxious and intrusive ads, which means the industry needs to adapt. One way to do so is with native ads, or ads that seem to be part of the landscape instead of separate from it.

This is growing increasingly common with influencers who seamlessly incorporate sponsorships into their video content. You can do the same with ads that play as more of a mini-episode or vlog than as an advertisement.

User-generated content, or UGC, is content provided by real users of the service or product. These are often in the form of reviews, photos, or videos submitted to the brand on social media sites or via feedback forms.

With 54 percent of internet users trusting online review content versus just 20 percent of the information they get from the brands themselves, you can’t afford to exclude UGC from your marketing efforts.

You can use many of the above ideas to highlight the benefits. These include telling a story or incorporating UGC.

Many brands do this well, but perhaps none as well as Apple:

The ad lists the technical features, while also showing how they benefit the consumer. You don’t have to sacrifice features for benefits; rather aim to show both.

YouTube, like many digital media platforms, is optimized for use on various devices. Its video content and, therefore, its ads are also optimized in much the same way. This ensures a better experience for users whether they’re on desktop or mobile.

With this in mind, consider optimizing ad creatives to work across various devices. YouTube encourages this with the capability to upload multiple versions of one video ad in different aspect ratios.

YouTube videos can be uploaded in square, vertical, and landscape ratios to best serve all YouTube users. This may require a little extra work to ensure the full experience is viewable in all aspect ratios, but it’s worth the effort. By uploading your video in numerous ratios, you ensure you are reaching a broader audience.

Recipe videos and GIFs have taken over social media news feeds over the last few years. HelloFresh takes advantage of this with their recipe video advertisements.

The brand commonly uses influencers and TV personalities (in this case, Antoni Porowski) as the home-inspired chef. This is a great way to leverage influencer relationships with their loyal viewers, thus making it more likely they’ll watch the entire advertisement.

There has been a sharp increase in brands using their platform to draw attention to serious issues. However, Always pioneered this form for video advertising.

The documentary-style of Always #LikeAGirl video ads tell a story in a relatable manner. The advertisements draw in the viewer and stir feelings of hope and inspiration.

If you’re hoping for a chuckle, then Skittles won’t disappoint.

Skittles, similar to Old Spice and Doritos, uses the element of surprise regularly in its video advertisements. While the regular use of surprise may seem contradictory, the brand always outdoes itself, which keeps viewers engaged.

According to Google, the fundamentals are best summed up as:

Beyond the fundamentals, a good ad creative will follow a traditional story arc. This contains five elements, which are the lead-in, the build, the climax, the offer, and the branding.

What types of ad creatives are most successful?

The beauty of the many social and digital media platforms is the ability to create different types of ad creatives for different groups of your audience. The type of ad creative that is most successful, then, will vary by platform.

Once you have wrapped your head around YouTube ad creation, the hard part is over. You can spend the rest of your time on the fun aspects, which include ensuring creating fun and effective ad creatives.

The above guide will help you implement new ideas into your creative process and inspire you to create the best ad content possible. That doesn’t mean you will always create the “perfect” ad, but you can learn what ad creatives work best for your audience through experimentation and testing.

What of the above elements do your favorite YouTube video ads include?