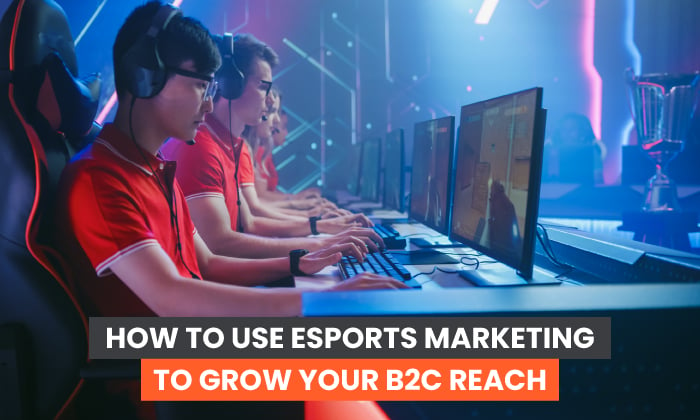 Twenty years ago, I had no idea we would be talking about eSports marketing. eSports was somewhat of an underground industry coveted by the most loyal fans. Today, eSports is a booming industry ripe for the taking by smart but strategic business owners who understand their audience.

What Is eSports Marketing?

eSports is the projected 1,790 million dollar industry taking hold of Millenials. It’s competitive gaming where groups assemble teams and play against each other as they would in any other sport. They hold tournaments, and many professional gamers have large followings on gaming platforms like Twitch.

Until recently, only brands like Red Bull and others associated with gaming were able to get in on eSports marketing. Things have quickly changed. Now, you have businesses from all niches, including Mercedes and Coca-Cola, wanting to get in on the action. Is it the right fit for your business? It might be.

Why would a B2C business want to choose eSports marketing over another strategy? First, marketing in eSports allows you to reach a dedicated and engaged audience. The people who follow eSports are invested in it; they interact with professionals from the industry, and they take the sport seriously.

Second, the cost of advertising is still relatively low due to the lack of competition. There aren’t many ads, and many of the big-name competitors haven’t reached the market yet, which means there are opportunities for smaller businesses to come in and display ads at a low cost. How do you use it?

Now that you understand the power of an eSports marketing strategy, you need to know how to implement it. In the following sections, I’ll break down actionable steps you can take to promote your business to the eSports market.

Investing in an in-game ad can be a unique, but powerful strategy. This is one sure-fire way to separate yourself from the competition, gather precise data about your audience, and help increase your brand awareness.

Keep in mind that the depiction of the average gamer isn’t always accurate. People think that gamers’ ages skew much younger than they do. There are a lot of stereotypes, but the average gamer is actually 34 years old, owns a home, and has a family. Plus, more and more women are gaming, as well.

Another advantage of in-game advertising is there are a number of display options.

The example above from the Madden football game from EA Sports shows a GMC ad as if it was a real game. In the NFL, companies often sponsor certain segments of the game. In this case, the auto manufacturer GMC sponsored the “moment of the game,” which is a highlight of the best play of the game.

You can also display your ad on virtual billboards and sidelines in games such as Madden, FIFA, and MLB The Show which are all part of the eSports world.

Dynamic ads in eSports are unique because they are only seen by viewers, and not the players. This presents an opportunity for you to reach a highly targeted audience because you know and understand the demographics of the people watching the sport. Much of that data is easily available to whoever wants it.

For example, the popular eSports game, “League of Legends” uses dynamic ads in one of their battlefields. As players move through the battlefield, they’ll continue to see the game as-is. Meanwhile, viewers of the game are seeing advertisements increasing brand awareness for those who advertised.

To implement an ad like this, you’ll need to contact the advertising and public relations teams of whatever game you want to advertise on. This is where the research and knowledge of your audience comes into play. Certain games have different audiences.

For example, I’ve provided the names of a few different games in this article so far. We talked about Madden and League of Legends. These two games have a completely different audience with unique interests. It’s up to you to understand these games, even if you don’t play them, because that’s how you’ll target the right people.

Like any other industry, there are influencers. This strategy opens the door to more possibilities because you can piggyback on the following and audience of the influencer across a variety of platforms. If the influencer is on TikTok and Instagram, you’ll be able to take advantage of that audience as well.

One of the reasons influencer marketing and gaming go hand-in-hand is because it’s engaging. These professional gamers actually talk to their audience, they engage on Twitch, they talk during their streams, and their audience respects them.

Streaming has become social media for eSports, so by partnering with an influencer and getting them to promote your brand, you’re increasing brand awareness and also using the respect the gamer has earned to boost your brand.

One great example of this is Bang Energy drinks. You’ll find these everywhere throughout the eSports world, but the advertisements seem so natural. It could be as simple as a gamer drinking it with the logo facing the screen for an hour. It brings awareness to the brand and influences the people who love that gamer to support it.

Partnering with an influencer could be as simple as getting a shoutout during live videos. There’s no cut-and-dry way to implement influencer sponsorship. You need to reach out manually to big names in the industry until someone gets back to you.

Another eSports marketing strategy is to sponsor a team. What does that mean exactly? It means that you’re responsible for some of the team’s expenses in exchange for the publicity. Companies that sponsor teams often get their logo on uniforms or the teams agree to consume their product exclusively whenever they’re on camera.

As you can see in the above image, Red Bull, Puma, and Twitch are all sponsors of this team because their logos are on the uniform.

This strategy is popular in sports of all kinds (even Little League) and is used to drive brand awareness. Will anyone see that shirt and immediately go out and buy a case of Red Bull? Probably not, but you’re keeping your brand fresh in the minds of people who purchase the product and that’s what larger companies pay for this type of advertising.

If you’re a smaller company, I wouldn’t recommend this method because people may not know who you are. An ad where you can briefly describe your product or service would do better. The companies that advertise this way are already well known and want to remind consumers that their favorite brands support eSports.

Static advertising is the opposite of dynamic advertising. Rather than changing, these ads remain in the game forever and display to both players and the viewers. There are a few different ways for this to work.

One strategy is with fictional brand advertisements. Think about “Buzz-Cola” from The Simpsons. Even though they call it a different name, we all know what reference they’re making so it serves its purpose.

You don’t have to choose such a subtle ad though. Some games such as racing games will display full billboards of ads for real companies. These static ads do not change no matter what happens in the game, and generally don’t require an internet connection.

Games like Fortnite, for example, have constantly changing dynamic ads because they are played online. A static ad would not require a connection and would likely be found in a story mode that is played offline.

To get your brand in the game, you’ll have to contact the marketing and public relations department—-and you’ll also need a pretty hefty budget. It takes a long time for development, and there isn’t a solid way to measure the results of a static ad, since you can’t track impressions.

Advergaming is one of the most extreme eSports marketing strategies. This is when a game is specifically created with the intention of promoting a brand or product. Do you remember when Burger King came out with “King” based games for the Xbox years ago?

If your brand uses advergaming, you’re putting your business front and center. However, there are a few clear concerns with this strategy.

First, for you to have any success, the game has to be fun to play. If the game is a flop, no one will play it and you might as well have flushed the money down the drain.

Second, you’re relying on the marketing and promotional efforts of the company. Chances are, you’ll only be able to get a smaller engineering company to sponsor your game.

Third, it’s going to cost a lot of money and take a lot of time because you’re producing a game from scratch. There’s probably a reason why Burger King only did this once.

What is the target market for eSports marketing?

The target market is men between ages 18-34 and primarily people located in Asian-Pacific countries. These individuals make up as much as 57 percent of eSports viewership. In recent years, female eSports viewership has increased quite a bit, with 20-30 percent of the audience made up of women.

How much do eSports ads cost?

According to esports.net, dynamic in-game advertising is the most affordable route, because you’re paying per 1,000 impressions. The price depends entirely on the game, niche, and target audience.

Static advertising can cost anywhere between 25,000-50,000 dollars depending on the game. The cost is so high because it requires the creator of the game to actually develop an in-game advertisement for your brand from scratch.

Advergaming is the most expensive option and can cost as much as 500,000 dollars depending on the game, target audience, and extent of the advertising. You’re essentially producing a game from scratch that is built around promoting your business.
Total, brands spent around 364 million dollars on eSports advertisements and sponsorships in 2020, and that number is expected to increase to 634 million by 2023. As demand increases for advertising space, so will the price.

What are the main types of eSports ads?

The main types of eSports marketing ads are dynamic ads, static ads, and advergaming. These ads require you to work directly with the creators of the game rather than the eSports teams. If you’re working with the players and teams involved with the sport, you’ll likely do influencer marketing or sponsorships.

All brands could benefit from some form of eSports marketing. It’s just important for you to use the right one for your business and goals. For example, a small business without a ton of reach wouldn’t likely benefit from endorsements and sponsorships because people don’t know who you are. Instead, you’d want an ad that allows you to describe your offering.

If you’re considering hiring an eSports marketing agency to help you, why not see what we can do for you? eSports is a booming industry among both young and old generations.

To be successful, you need to take advantage of growing marketing trends, and eSports is right at the forefront of it all.

How do you plan to take advantage of eSports marketing? Do you think it’s all hype?