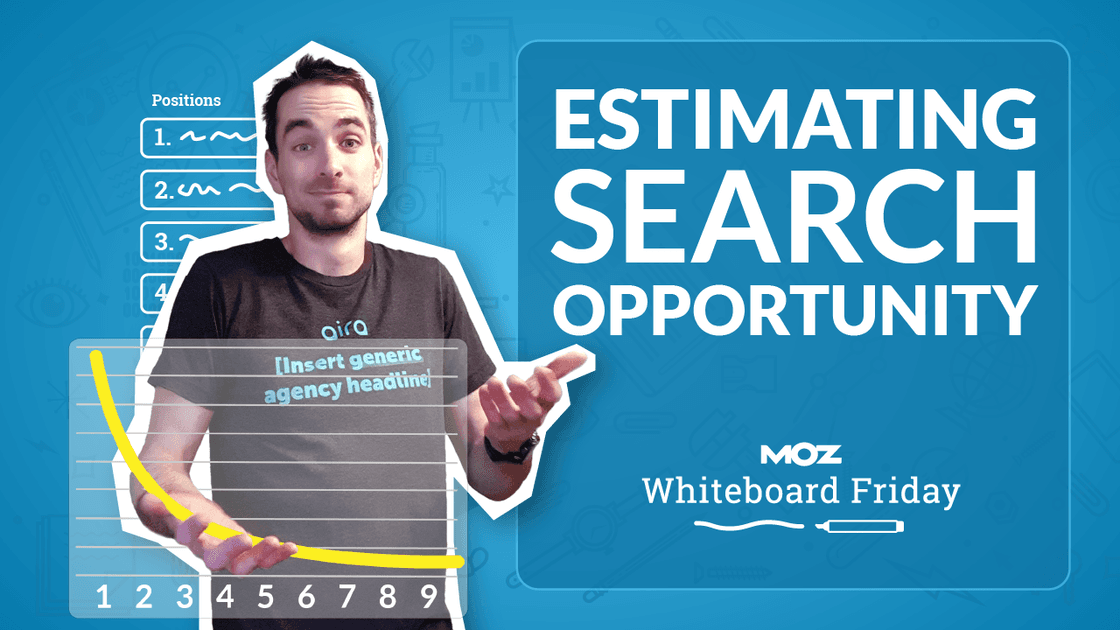 Estimating the opportunities within your various SEO efforts is an important component of your analytics, not only to help determine where to focus your energy, but also to prove the potential value of your work to others. Building on the recent post about Aira’s new keyword estimation worksheet, in today’s episode, Robin walks you through a good strategy for this all-important estimative work.

Good evening, good afternoon, and good morning wherever you happen to be in the world. My name is Robin Lord. I work for a digital marketing agency called Aira here in the UK. I’m going to be talking to you about estimating opportunities with different searches. Now, it’s really important that we’re able to estimate opportunity because it gives us a way to talk about how valuable our projects are to other people and it helps us to figure out where we should be focusing our energies.

But to begin with, the kinds of things that we have, when we start to estimate opportunity with different searches, are usually the number of keywords that we want to target, for example here’s one “setting up a business,” and the search volume that we have for those keywords.

So even if we were in the best possible position, we can’t be everywhere. So we can’t just assume we’re going to get that 6,500 clicks through to our website.

Here we’ve got the curve. We’ve got all of our positions, 1 through 10 here at the bottom, and the side is how likely we think someone is to click through to our site. So the easiest way to kind of visualize it is in a graph. But what we usually have is in a table so that we can use something like a VLOOKUP. If we are saying position one, then we know that our click-through rate for that is probably going to be about 35%.

So we use that to estimate what we could get out of this search for position one. Likewise, if we’re looking at like position eight, we might say our click-through rate for that is more like 5%. So if we’re in position eight, that’s kind of what we assume we’re going to be able to get out of it. We use that in a formula kind of like this one. So we say the search volume, so how many how many times something is being searched here at the top, multiplied by the click-through rate is how many clicks we expect to get.

So in this case, 6,500 is our search volume. Thirty-five percent for position one gets us about 2,300 clicks a month or 27,000 clicks a year. You can see here I’ve hidden up here you can kind of mark it here at this line just to visualize it for you.

That’s kind of what we’re doing here. We’re assuming position one will get us this kind of click-through rate, and that would result in about 27,000 clicks a year for this search term.

Now, we could stop there, and some people would stop there, in terms of, okay, well, I’m going to assume I can get position one for every keyword and I’m just going to multiply it out to make sure that I’m not making wild predictions about how much traffic I might be able to get.

But that’s the way I’m going to leave it. That can give you a slightly more accurate estimate, but it’s not factoring in times when we might already be ranking a bit for a keyword. So say, for example, we are already ranking position eight for this specific search. Now we can see here, position eight is already getting some clicks.

So how could we handle that? Well, fortunately, the math around that is actually fairly simple. It’s exactly the same sum as we’ve done here.

Also, it doesn’t really like to replace Amazon by and large because Amazon tends to be a great result for a whole bunch of different things. Particularly it doesn’t like to replace itself. So if we’re starting to think about what we could get for this keyword and we’re assuming we could get position one is 35% click-through rate, we might look at some of these results and think, well, actually I don’t think I can get up here.

I think we should probably be looking a little bit further down. So maybe we look at something like position fifth or fourth. Say position four is a page about how to start a business. Position five is Wikipedia. Position six is someone offering to sell a service, so that you can buy a business setup.

Seven is 50% off a business setup. So again, offering to sell, but they’ve got that cheeky 50% discount that you can benefit from. So if we look at all of this, we might start to think, okay, well, I don’t think I can reach position one, probably not position two, probably not position three. Actually, I think I probably don’t want to assume I can replace Wikipedia here either in position five.

So the best position that I’m looking at here is actually position four. So I should go back to some of my click-through rate estimates. I should estimate based on position four, rather than position one, and then use that to get an idea of the total opportunity we could get for this keyword.

How to do this

Now, you could be wondering how you might do this. Actually, there’s a bunch of tools that will give you the full top 20 export for a whole list of keywords. The first time I did this, I used the STAT top 20 export, and I just exported everything and I dumped it into a Google Sheet. So I ended up with all of my keywords and all of the top 20 results row after row after row after row on my sheet.

So in this case, four, six, seven, and eight, which we are currently. Then I just found the highest position that we could get in that list for each keyword, and I used that with my click-through rate curve to try and estimate how much traffic we might be able to get. So this all really boiled down to like IF formulas and VLOOKUPs. So it’s very accessible for anyone who wants to get involved in this kind of thing.

Get fancy with it

Now, we could leave it there. That would give us a pretty solid understanding of where we might be able to get, and it’s far more nuanced than the picture that we might get at first blush. If you want to get a bit more fancy with it, there’s other information that you could pull in to your analysis.

So say, for example, you’re able to pull in the titles of all of the pages that are currently ranking. Say in position four, it’s how to start a business, and position six, it’s buy a business setup, and position seven, it’s 50% off a business setup. Again, if we look at these, we could use some fairly simple formulas, even just in Google Sheets, to try to categorize these into different intents. So “how to” is fairly clearly an informational search, an informational result rather. So we’re not trying to categorize the search.

We’re trying to categorize the individual results. “Buy” is a fairly clear purchase search, and “50% off” again suggests that it’s trying to sell us something. So if we start to look at these results, we can filter them down even more if we want to. So say, for example, we’re working on a site and we know it has to be a product page. If we’re going to target this term, we have to use a product page.

Well, we could do that same filtering process, except this time we’re marking anything where the title is something like how to or top tips or instructions how to, or anything that seems like a blog post, and we remove them as well. So we say, actually, we couldn’t get this either. This is the highest we could get with this product page.

If we do that across all of our keywords, we know that we have to use product pages. We’re saying, okay, for this, we’re position six. Well, say position six actually has a pretty low click-through rate. If we’re looking at position six for this keyword, we’re already at position eight. So maybe the opportunity that we’ve got for this keyword is actually pretty small, and we decide that we want to focus on other things.

So that’s another quick way to filter all of our different opportunities by just removing the kind of results that we wouldn’t want to compete with. Alternatively, if we don’t already have an idea that it’s got to be a product page, we could go through all of our searches and say we know that it’s going to be position four is the best place that we could get.

Now, the aim for any of this isn’t to make people’s decisions for them. We’re never going to just send this sheet, for example, off to someone and not have an SEO professional look at it. But it means that instead of spending lots of time having to reverse engineer, having to think really hard about all these different things and pull information into one place, we have a starting point for people to go from.

So when we have someone who’s an expert at SEO looking at this, they’ve got all of the information in front of them to begin with. That’s actually the approach that we tend to take in general in Aira. So when we do this kind of work, we actually tend to use a Python script, and that script pulls in all of the top 20 results. It also categorizes those search results, the individual results rather than the search term itself, based on whether they seem informational or transactional.

It finds that opportunity. It finds that highest place that we can currently get and subtracts where we’re ranking at the moment. That means that we end up with a sheet where we can order things quite nicely based on highest opportunity to lowest opportunity and categorize them based on what kind of results they are.

We also pull in some other things like authority, which is one thing that you could also use to filter down your results if you’re starting to dig into this. We also use the search results to see how similar different searches are as a way of clustering them. So those are some other things that you can dig into once you get familiar with these kinds of concepts and really start to accelerate. Now, you don’t have to go that far.

You could do any step along this route and get a little closer to a nuanced understanding of what this search result can get you, and that’s going to be a really positive advancement because the more that we can bring in this nuance, the more quickly we’re able to identify these different things. All of these are decisions that you’re going to be making anyway. You’re already a smart SEO professional.

You’re already going to know all this information. It’s about speeding up your path to that answer. Anyway, thanks very much for listening to me. I really enjoyed chatting this through with you. I hope you’ve enjoyed it as well, and I’ll look forward to hearing your thoughts. Thanks a lot.